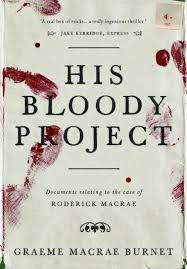 The year is 1869. A brutal triple murder in a remote community in the Scottish Highlands leads to the arrest of a young man by the name of Roderick Macrae.

A memoir written by the accused makes it clear that he is guilty, but it falls to the country's finest legal and psychiatric minds to uncover what drove him to commit such merciless acts of violence.

Was he mad? Only the persuasive powers of his advocate stand between Macrae and the gallows.

Graeme Macrae Burnet tells an irresistible and original story about the provisional nature of truth, even when the facts seem clear. His Bloody Project is a mesmerising literary thriller set in an unforgiving landscape where the exercise of power is arbitrary.

I thoroughly enjoyed this unusual thriller and am excited by this author. It was shortlisted for the Man Booker Prize 2016 and won the Saltaire Fiction Book of the year for 2016 and deservedly so.

Written entirely through the documents presented for the case we are able to view the events from multiple viewpoints which I felt added an enormous amount to this story. I do not recall reading any other book presented in this format and the originality of it gave it an unexpected authenticity.

I was completely gripped by this book and did not want to put it down. Well researched and beautifully written it brings a fascinating period of history into sharp view and enables the reader to understand the wider social and political society in which the novel is set.

All through this I had to remind myself that it is a novel as the realism is startling. The atmosphere is so cleverly evoked which, bearing in mind, the book reads as a series of legal documents is extremely clever.

I can't praise this novel highly enough as I loved every word. I think anyone with an interest in history or crime thrillers would really enjoy this book. Do give it a try and let me know your thoughts.

Grahaeme Macrae Burnet was born in Kilmarnock in Scotland and now lives in Glasgow. Previously he lived and worked in Prague, Porto, Bordeaux and London. He has an MA in English Literature/Film Studies from Glasgow University and an M.Litt in International Security Studies from St Andrews.