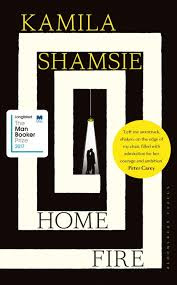 Isma is free. After years spent raising her twin siblings in the wake of their mother's death, she resumes a dream long deferred - studying in America. But she can't stop worrying about Aneeka, her beautiful, headstrong sister back in London. Or their brother, Parvaiz, who's disappeared in pursuit of his own dream - to prove himself to the dark legacy of the jihadist father he never knew.

Then Eamonn enters the sisters' lives. Handsome and privileged, he inhabits a London worlds away from  theirs. As the son of a powerful British Muslim politician, Eamonn has his own birthright to live up to - or defy. The fates of these two families are inextricably, devastatingly entwined in this searing novel that asks: what sacrifices will we make in the name of love?

A contemporary re-imagining of Sophocles' Antigone, Home Fire is an urgent, fiercely compelling story of loyalties torn apart when love and politics collide - confirming Kamila Shamsie as a master storyteller of our times.

Hidden between the monotone covers of the UK edition of this book lies a real gem. It is an original, thought-provoking and memorable story which deals with the contemporary issue of radicalisation.

Ms. Shamsie has created characters that are utterly believable. Five distinct character voices are woven together to produce a rich tapestry of atmospheric detail that a lesser novelist would not have attained. I have previously read novels where this multi narration merely makes for a disjointed telling of a story. However, with this book the method enhances the reading experience as each character adds a different dimension to the story.

Added to that a twist in the story at the very end and which contributes to a fine novel that I am certain means that this book will remain at the top of the bestseller list for a goodly while.

Longlisted for the Man Booker Prize 2017 this is an outstanding example of writing at its best and has elevated the author to one of my favourites. I have every intention of reading more by the very talented Ms. Shamsie.