The Orphan's Tale by Pam Jenoff 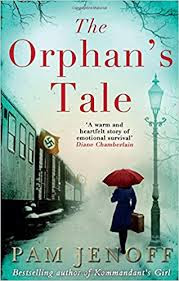 In Nazi-occupied Holland, seventeen year old Noa saves a baby from a train bound for the concentration camps, fleeing with him into the snowy wilderness.

Passing through the woods is a German circus - a troupe of waifs and strays, led by the infamous Herr Neuroff. They agree to help Noa and the baby - on one condition.

To earn her keep, Noa must master the flying trapeze - under the tutorage of mysterious aerialist, Astrid. Soaring high above the crowds, Noa and Astrid must learn to trust one another - or plummet. But, as war closes in, Noa will earn that loyalty can be the most dangerous trait.

Based on real events, The Orphan's Tale is a spectacular story of love, sacrifice and courage.

This book absorbed me from the very first page and captivated me right through to the end with it's original portrayal of the events of World War II. The circus setting for this novel dealt with the very serious circumstances that war brought to occupied territories but within the outwardly colourful and vibrant setting of the circus.

The chapters alternate between the two main characters of Noa and Astrid. I must confess there were times I could not find their individual voices but I was so gripped by their story that this really did not seem to matter. It was very interesting to observe their relationship develop as the back story for both of these characters was heartbreaking. Their bravery was astonishing and I felt nothing but admiration for them.

Based on true events Ms Jenoff  successfully weaves fact into fiction and has created a thoroughly well researched and captivating read.

Ultimately, this is an uplifting story of survival that I could not wait to get back to between reading sessions. It is a heartfelt and memorable story that I could imagine reading for a second time - and there are very few books that I place in that category.


Pam Jenoff was born in Maryland and raised outside Philadelphia. She attended George Washington University in Washington, D.C., and Cambridge University in England. Upon receiving her Master's in History from Cambridge, she accepted an appointment as Special Assistant to the Secretary of the Army. The position provided a unique opportunity to witness and participate in operations at the most senior levels of government, including helping the families of the Pan Am Flight 103 victims secure their memorial at Arlington National Cemetery, observing recovery efforts at the site of the Oklahoma City bombing and attending ceremonies to commemorate the fiftieth anniversary of World War II at sites such as Bastogne and Corregidor.

Following her work at the Pentagon, Pam moved to the State Department. In 1996 she was assigned to the U.S. Consulate in Krakow, Poland. It was during this period that Pam developed her expertise in Polish-Jewish relations and the Holocaust. Working on matters such as preservation of Auschwitz and the restitution of Jewish property in Poland, Pam developed close relations with the surviving Jewish community.

Pam left the Foreign Service in 1998 to attend law school and graduated from the University of Pennsylvania. She worked for several years as a labor and employment attorney both at a firm and in-house in Philadelphia and now teaches law school at Rutgers.

Pam is the author of The Kommandant's Girl, which was an international bestseller and nominated for a Quill award, as well as The Winter Guest, The Diplomat's Wife, The Ambassadors Daughter, Almost Home, A Hidden Affair and The Things We Cherished. She also authored a short story in the anthology Grand Central: Original Postwar Stories of Love and Reunion. She lives outside Philadelphia with her husband and three children.

(from the authors website http://www.pamjenoff.com/author.cfm)
Posted by Annie at 12:05