A Horse Walks Into Bar by David Grossman A comedy club in a small Israeli town. An audience has come expecting an evening of amusement. Instead they see a comedian falling apart on stage; an act of disintegration, a man crumbling, as a matter of choice, before their eyes. Dovaleh G, a veteran stand-up comic  - charming, erratic, repellent - exposes a wound he has been living with for years; a fateful and gruesome choice he had to make between two  people who were dearest to him.

Flaying alive both himself and the people watching him, Dov provokes revulsion and empathy from an audience that doesn't know whether to laugh or cry - and all this in the presence of a former childhood friend who is trying to understand why he's been summoned to this performance.

Winner of the Man Booker International Prize 2017, at 198 pages this is a very short but brilliant novel. Whilst I found this an excellent read in every way I am glad that it was not any longer because it is very intense and any longer would have been hard to bear.

Like the audience in the novel, I was expecting some humour. What we, and the audience get, is to witness the disintegration of a comedian on stage, and quite frankly, it is shockingly painful to observe. However, it is done with such humanity and with an anguished genius that I can easily envisage reading this book again.

Please don't be put off by the sombre nature of this book as it is well worth reading. Having never read anything quite like this book before I read it in one sitting. I really hope you will all read it.

Translated from the Hebrew by Jessica Cohen 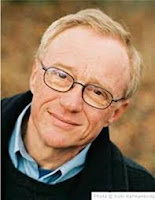 David Grossman is the bestselling author of numerous works, which have been translated into thirty-six language. His most recent novels were To the End of the Land, described by Jacqueline Rose as 'without question one of the most powerful and moving novels I have ever read', and Falling Out of Time. He is the recipient of the French Chevalier de l'Ordre des Art et des Lettres and the 2010 Frankfurt Peace Prize.
Posted by Annie at 11:13