The Wicked Boy by Kate Summerscale 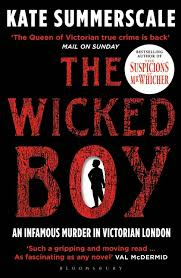 An infamous murder in Victorian London.

On 8th July 1895, thirteen-year-old Robert Coombes and his younger brother Nattie set out from their East London home to watch a cricket match. Over the next ten days they spent extragantly, visiting the theatre and eating out. The boys told neighbours their father had gone to sea, and their mother to visit family in Liverpool. But when a strange smell began to emanate from the house, the police were called. What they found threw the press into a frenzy - and the boys into a highly publicised trial.

Despite the notoriety this case attracted at the time Ms. Summerscale has taken this crime, which was little known to a modern readership, and developed it into this fascinating and absorbing account of matricide in Victorian London.

It is a thouroghly compelling read and I was gripped by the events that led these vulnerable and neglected boys to commit the shocking crime that they did.

Through meticulous research the author creates a powerfully informed and vivid description of events both before and after the extraordinary happenings which took place on 8th July 1895. Through wonderful storytelling the reader is transported back to London's East End to rural Australia via the courts and prisons of London.

Despite the grim nature of the facts, this is an uplifting and heartfelt historical narrative that tugged at my heartstrings through the redemptive power of the story contained within the pages of this book. Anyone who likes history or true crime will love this book and I highly recommend it.

Kate Summerscale is the author of the number one bestseller, The Suspicions of Mr Whicher, winner of the Samuel Johnson Prize for Non-Fiction 2008, the Galaxy British Book of the Year Award, a Richard and Judy Book Cub pick and adapted into a major ITV drama. Her first book, the bestselling The Queen of Whale Cay, won a Somerset Maugham award and was shortlisted for the Whitbread Biography Award. Her third book, Mrs Robinson's Disgrace, was a Sunday Times bestseller. Kate Summerscale was elected a Fellow of the Royal Society of Literature in 2010. She lives in London.
Posted by Annie at 10:15